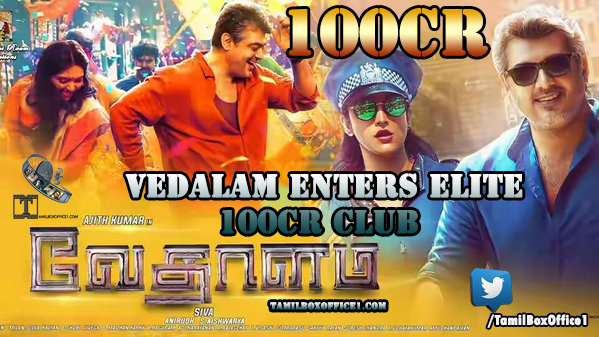 Ajith's Vedalam which released on Deepavali day has crossed the prestigious 100 Cr mark World Wide. According to sources the movie has grossed between Rs 60-65Cr in Tamil Nadu, highest ever for an Ajith's movie. We will be posting area-wise breakup with total gross next week. Vedalam is also in profit zone in Karnataka and Kerala having grossed Rs 7.70 Cr and Rs 5.30 Cr respectively. Outside of Tamil Nadu, Vedalam has done blockbuster business in Malaysia grossing Rs 11.6 Cr. The movie is declared a Super Hit in Overseas having grossed Rs 30.65 Cr. Overall the movie has managed to ring in 105+ Cr in just 13 days globally making it Thala Ajith's biggest grosser of his career.

Posted by TamilBoxOffice1 at 10:45 PM
Email ThisBlogThis!Share to TwitterShare to FacebookShare to Pinterest
Labels:Weekends News, WorldWide