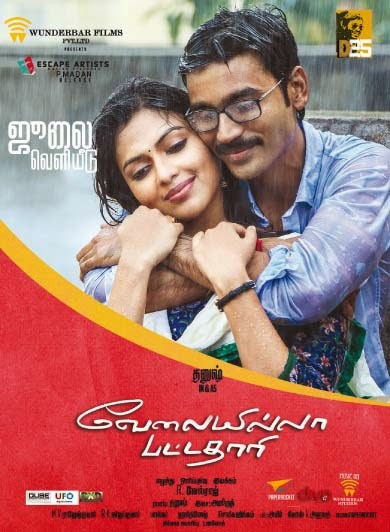 Velai Illa Pattathari aka VIP released in approximately 150 screens in overseas markets in 18 countries. The movie opened at 32 location in the US and was declared a Blockbuster within 2 days of its release. In four weeks VIP grossed $224,195 [₹. 1.37 Cr] and it is Dhanush's highest grossing movie to date in US. In Malaysia the movie opened at 54 location has managed to collect $1,294,447 [₹.7.89 Cr] after 5th weekend. Here is the weekly break down.

VIP managed to become the highest grossing Tamil movie of 2014 in Malaysia surpassing Jilla, Veeram and even Kochadaiiyaan joining the Top 10 All-Time Grossers at 10th spot.  In UK VIP had a limited release and yet collections were way better than expected. In just three weeks VIP managed to ring in £95,715 [₹. 98.30 lacs] from  8 locations. In Australia VIP opened at four locations and managed to collect A$ 63,076 [₹. 35.59 lacs]. VIP is now 8th highest grossing Tamil movie in Australia just below Thuppakki.  The movie also released in Sri Lanka, UAE-GCC, Europe, Singapore and Canada. However no official box-office numbers are available from these territories.  Our conservative estimate is that VIP grossed approximately $1,372,073 [ ₹. 8.31 Cr] from these territories. Total overseas collections of VIP are over  ₹. 18 Cr.


Posted by TamilBoxOffice1 at 3:43 PM
Email ThisBlogThis!Share to TwitterShare to FacebookShare to Pinterest
Labels:Weekends Overall