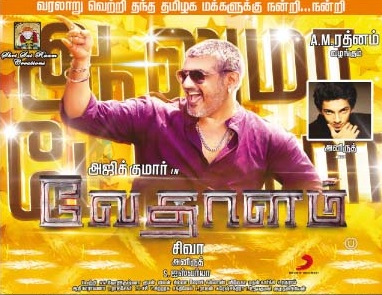 
Vedalam which was the biggest release for Ajith in France crossed 100,000€ mark in just 6 days. Only a handful of movies managed to achieve this feat in the past. At the end of Day 6 Vedalam reached 9,927 entries earning 107,080€ [Rs 76.23 lacs]. The movie has already entered profit zone and expected to cross 10,000 entries by this week. Vedalam is expected to end its France run with a 'Super Hit' verdict. This is an incredible achievement considering the current situation in France caused by terrorist attacks. Saturday's show in Paris had to be cancelled. Here is the list of Tamil Movies that managed to collect upwards of 100,000€ in France.