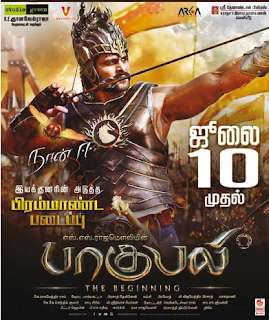 Baahubali(Tamil) has been sold for unprecedented prices all over the World. Thenandal Films has bought the TN rights from Studio green & sold it to individual territories in a combo deal with RudramaDevi. Individual Territory Deals & Overall TN rights can also be rated on par with Tier 2 Kolly hero's films. Also the film has no Tax Exemption !

Overseas rates are also high particularly in USA-CAN where it has to do minimum $350k for buyers to be safe.

Karnataka & Kerala Tamil version rights rights are sold in a combo deal with other languages.

Posted by Unknown at 7:39 AM
Email ThisBlogThis!Share to TwitterShare to FacebookShare to Pinterest