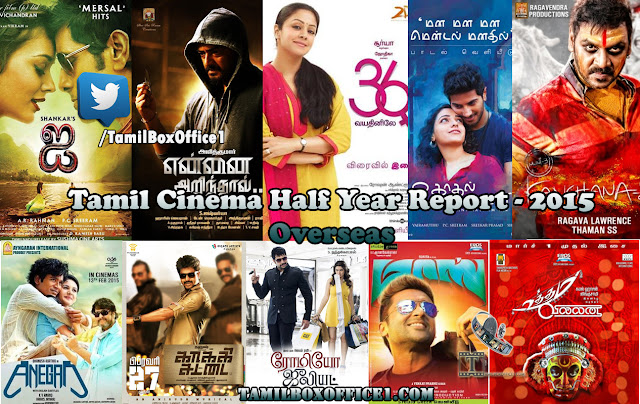 
A total of  32 movies released in overseas market out of 107 that released in Tamil Nadu in the first half of 2015. Eight of those movies performed very well and become profitable ventures for everyone involved. A 25% success rate, one out of four movies were profitable.

I and Kanchana2 ended their successful run as Blockbusters.  Yennai Arindhaal which released in record 32 countries emerged as Super Hit along with OK Kanmani and 36 Vayadhinile. Anegan, Kaaki Sattai and Romeo Juliet were given the Hit status. Masss was  expected to do well overseas as it witnessed widest ever release in Suryia's career, but despite it's strong performance in Malaysia the movies only managed to become an Average grosser. Similarly Uttama Villain which also saw a wide release performed well in the US but overall the movie was rated as a Below Average performer. Also small budget movies such as Darling, Demonte Colony and Kaaka Muttai have done very well in Tamil Nadu but did not make an impact in overseas market.

Here is the list of Top 10 Grosser in the 1st half of 2015 along with their box-office verdict.

The outlook on 2nd Half of 2015 looks very promising with biggies such as Puli and Thala56 are lined up for September and November release. Other movies that are expected to perform well are Papanasam, Baahubali, Vaalu, Maari, RajiniMurugan and 10 Enradhukulla.

Posted by TamilBoxOffice1 at 10:02 PM
Email ThisBlogThis!Share to TwitterShare to FacebookShare to Pinterest
Labels:Weekends HlafYear, News